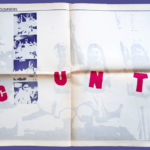 Next Story:
Sheila de Bretteville: from graphic feminism and feminist design to emancipation

Géraldine Gourbe
Géraldine Gourbe is a philosopher, critic and art curator. She specializes in the Southern California art scene, the history of radical pedagogies and inclusive feminism. She has taught philosophy of art at ENSAD, the University of Metz, Sciences Po Paris, and the Beaux-arts of Marseille and Annecy. In 2018 she curated an exhibition at the Villa Arson in 2018 around the work of Judy Chicago and West Coast in the 1960s, entitled "Los Angeles, the cool years". Since 2015, she has been working on a counter-reading of the history of ideas and art in France from 1947 to 1989 in partnership with the art historian Florence Ostende. Her research led to the curating of the first edition of the Dunkerque Giganticism Art and Design Triennial. She co-signed with Hélène Guenin the exhibition at the Musée d'Art Moderne et d'Art Contemporain de Nice She Bam Pow POP Wizz : les amazones du Pop, May-September 2020. She has published a collective book on the alternative scene in Los Angeles In the Canyon, Revise the Canon, utopian knowledge, radical pedagogy, and artist run spaces in Southern California, Shelter Press, Rennes and a monograph on the artist Judy Chicago, To Sustain the Vision, Shelter Press, Rennes & Villa Arson, Nice (March 2020).

Theodore Roszak, The Making of Counter Culture: Reflections on the Technocratic Society and Its Youthful Opposition, Oakland, University of California Press, 1968-1995.

Unpublished interview conducted by critic and feminist Moira Roth in Pasadena in 1973 and conserved in Kaprow’s personal archives at Getty Research.

Concept he will develop throughout the three-part series from 1968 to 1973, The Education of the Un-artist.

Margaret Mahoney from Carnegie offers him a grant to experiment with pedagogy, with the added requirement that Allan Kaprow also design and guide a training program for the teachers. See Herbert Khol, The Discipline of Hope, Learning from a Lifetime of Teaching, The New Press, New York, 1998.

Noah Purifoy was the curator of one of the first exhibitions on Junk Art, in 1967, which included, amongst others, black artists such as Bettie Saar and himself.

Such as the insult “Fuck”.

While participating in Other Ways, Sim van der Ryn was targeted by the police, particularly People’s Park, his collaborative project developed in the Bay Area. The project was to create an eco-village based on the life forces of the Free Speech Movement, which had multiplied on the Berkeley university campus between 1964 and 1965. Following the arrest of student Jack Weinberg, a political activist on campus, a crowd of students blocked a police vehicle for 32 hours and demanded freedom of expression at the university, including for political activists. The movement took over and changed how teaching is conducted at universities.

Activities, contrary to happenings, are actions that, according to Allan Kaprow, are less theatrical, less monumental or spectacular, and more directed at experiencing a performative task, in a small group. The idea of public or event disappears to make room for experimentation and feedback between participants. Their more confidential nature had an impact on Allan Kaprow’s more tenuous current events.