Previous Story:
Art’s Passengers, and the
Interview by Christian Rinaudo 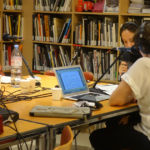 Next Story:
ForTune, radiograph of art in the world of work

Barnett Newman’s messianism, as referred to often by those who have closely studied his oeuvre, by no means supplanted his interest in anarchist theses, in particular those put forth by Pierre Kropotkine, for whose book, Memoirs of a Revolutionist, he wrote the preface.

The installation El ingenioso hidalgo don Quijote de la Mancha was presented several times. A first time in Amsterdam in 2005, then several other times in various cities in Europe and the Middle East.

Šaban Bajramović, born in Serbia in 1936 (then the Kingdom of Yugoslavia) and who died in 2008, is a central figure in Roma culture. He was imprisoned for five years on the island Goli Otok for desertion and insubordination during his military service. His songs are often used in films by Emir Kusturica.

The installation and electronic device have been made possible thanks to Vivien Roubaud technical skills. Kerwin Rolland used his own to produce the specific sound display.

Jean-Baptiste Ganne consulted several writings on the meaning of these two words: “I read ‘Disóccupati!’ (‘dis-occupy yourself!’) instead of ‘Disoccupati!’ (‘The Unemployed!’). The difference between these two words comes down to how the accent is placed when spoken aloud. The Italian word ‘disoccuparsi’ embodies the beauty of this magnificent posture.”